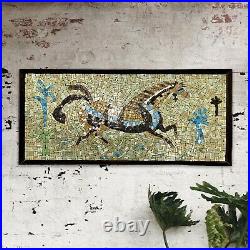 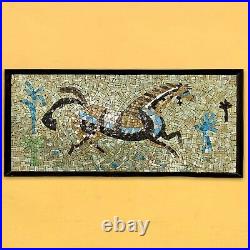 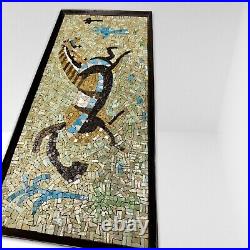 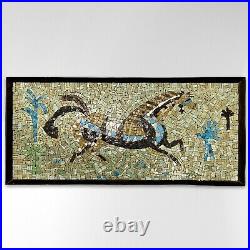 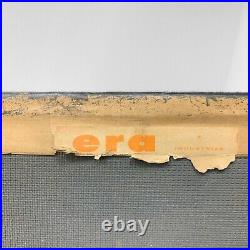 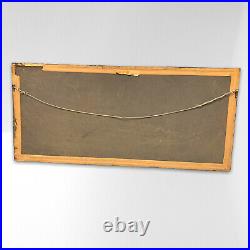 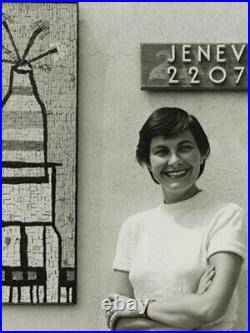 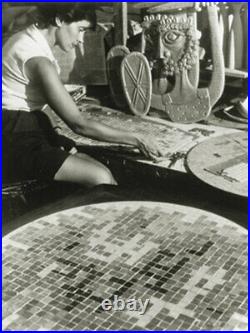 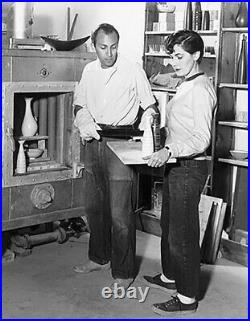 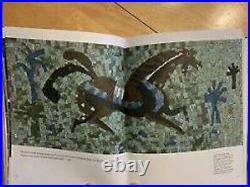 Professional vintage vendors since 2005. Rare Evelyn Jarome Ackerman GALLANT HORSE Mosaic Era MCM Midcentury Art Vintage 1958. This is an absolutely influential Midcentury Modern piece. This is an original from the artist, framed glass tile mosaic titled Gallant Horse. This is an original piece made by Evelyn Ackerman and Jerome Ackerman with ERA Industries that is also featured in their book, Hand-in Hand, as a 2-page centerfold. Mosaic California, 1950s glass, wood frame framed size: 37"w x 17"h. We did not observe any evidence of repairs or restoration. Scuffs to the edges of the wood frame. ERA Industrias label on the back is torn.

In 1941 she graduated from Central High School and began at the University of Michigan as an art major. Then, in 1942, her father died and her three brothers entered the military. With her mother in need of help, she transferred to. As a fine arts and art history major. There she was introduced to the German Expressionists, Rembrandt, Cézanne, Klee, and Matisse by an art history professor.

After completing her BFA degree with distinction in 1945, Evelyn was offered a scholarship at Wayne to complete her MFA degree in fine arts. In 1948 Evelyn met Jerome (Jerry) Ackerman at her sister-in-law's studio, Lucé Lipton Interior Designs, where Evelyn worked part time; they began dating and married on September 12, 1948. Shortly after marrying, Jerry and Evelyn visited his parents, who had moved to Los Angeles. While there, they met and became lifelong friends with Beatrice Wood, Gertrud and Otto Natzler, John Follis, Rex Goode, and Max and Rita Lawrence, who formed Architectural Pottery. As art students in 1949, Evelyn and Jerry found inspiration for a creative vision that changed their life and career. "For Modern Living, " an exhibition organized by Alexander Girard at the Detroit Institute of Arts, showcased the work of several innovative contemporary designers, including Ray and Charles Eames and George Nelson furniture, Kurt Versen lighting, and V'Soske carpets.

This experience turned them on to the idea of careers marrying their training in design and fine arts. Drawn by the temperate climate and the lively postwar artistic community, the couple moved to Los Angeles, California in 1952, following the completion of their MFAs at Wayne, to establish themselves as designer-craftsmen.

As their talent and business blossomed over the years, so did their commissions and major museum exhibitions. Today, the Ackermans' work, highly acclaimed over the course of their 50-year collaborative partnership, has been rediscovered by both design historians and a new generation of mid-century collectors.

Jerome and Evelyn Ackerman made beautiful designs together for more than 60 years, their work is the subject of the book. Hand-In Hand: Evelyn and Jerome Ackerman.

Published by Pointed Leaf Press. The Ackerman style is bright, playful and animated and epitomizes the joy and lightness in midcentury California design. Photographer Dan Chavkin and former. Photo editor Lisa Thackaberry edited the book, a gorgeous homage to the Ackermans.

Designer Jonathan Adler is a big fan as well, contributing a foreword where he enthuses over the love and childlike joy in Ackerman world. This item is in the category "Collectibles\Vintage, Retro, Mid-Century\1960s". The seller is "vulture-culture-vintage" and is located in this country: US. This item can be shipped to United States, Canada.
Homepage  Links  Contact  Privacy Policies  Terms of service