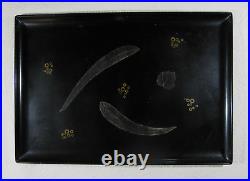 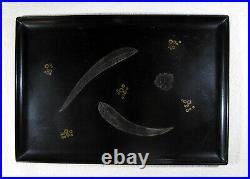 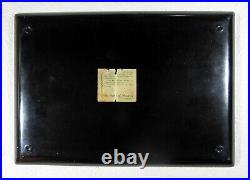 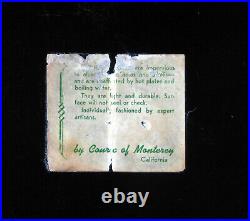 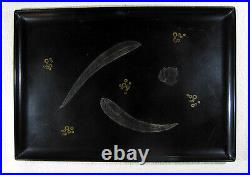 Very Early Couroc of Monterey Tray. This is an 18" x 12.5" Couroc of Monterey Tray from early in the company's history when the owners Guthrie Courvoisier and Moira Wallace operated more like an arts and crafts studio than a mass producer of home and barware. Unlike most later Couroc trays, this tray is unique as it was made using impressions inlayed leaves and arranged brass elements. It has a muted, modern mid-century appearance that only Couroc trays from this very early era are known for and a satin finish rather than the high gloss of the 1960s and 1970s.

If you are a true Couroc collector, you will realize that this tray is very rare and highly significant. As Couroc was just getting started, it is likely that the design was personally arranged and executed by one of the two founders. Trays from this era of Couroc have disappeared and only come up every few years. I know, I have collected their work for decades. This has been in my collection for over ten years.

There is a first generation Couroc label on the back, also in fine condition. No warps, chips scratches or sun damage. This item is in the category "Collectibles\Vintage, Retro, Mid-Century\1960s".